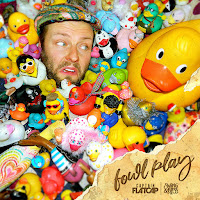 The latest offering from the – still relatively fresh – Swing & Bass label is Captain Flatcap’s Fowl Play, a four-track EP with one of my favourite pieces of cover art I’ve seen in quite some time. As an act, Captain Flatcap tends to be quite fluid, both in terms of genre – fitting loosely into the electro swing category but taking influence from anything and everything – and also the act itself: Captain Flatcap representing anything from a band, DJ, or producer, depending on what is being called for – all centred around the mastermind that is Chris Rotherham.

This most recent EP begins with ‘Fowl Play’, which puts us in high spirits from the very start, opening with a sample from a Too Many T’s interview, whereupon the questions being asked by the child host include that of who would win in a fight between Dutty Moonshine, Danny Wav, and of course, Captain Flatcap. We then have a relaxing, chilled introduction, followed by a slightly minimal drop with some distinctive squelches, and the fun mood continues with the sounds of ducks quacking embedded throughout the track. Overall, the song is nice, downbeat, and a good opener. Following this is ‘Bang Bang Boogie’, in which the trademark flute continues, juxtaposed against some interesting glitchy sounds. We also find an electric guitar here, which is very welcome as the instrument doesn’t tend to be heard too much in this genre. The track is very danceable, but I can’t help feeling that it goes on a bit too long; it could do with either being slightly shorter, or fleshing out and expanding its ideas more. There is a little bit of development towards the end, but unfortunately it seems somewhat too little too late.

Next up is ‘Quacky Baccy’ – extending the duck-based theme of the EP – which starts off charmingly, with a jazzy, almost New Orleans vibe, and introduces a Hendrix-esque guitar as the song progresses. It’s clear that there’s a lot of classic rock influence on this release, if only subtle, but it works wonders. As the song continues, the guitar is interspersed with some filthy wobbles which begin to emerge, and the second build-up towards the end is fantastic – particular the way in which this guitar is utilised alongside the more synthetic sounds. Finally, the EP closes with ‘I Spy’, featuring the Kurnel MC, who has previously worked with Captain Flatcap for the track ‘In My Blood’ on their previous release. As the song begins, the scratches alongside the flamenco guitar during the intro signal an exciting start, and we go on to have some very effective uses of slow and gradual phase sweeps. The Kurnel MC brings some fun and clever lyrical references throughout, which underlies an important message of protest. Towards the end, some more wobbles are introduced, which are a little unexpected at first, and could maybe have been built up slightly better, but once they’re in, they work very well indeed.

As the EP finishes, I feel like I’ve just listened to one of the first significant releases of the year for this genre. One never knows quite what to expect from Captain Flatcap; aside from the unique flute-playing which is found across all of the act’s music, the sound often seems to vary from release to release. I feel that this is the ultimate goal however, and if a wide variety of sounds is the aim, then it has certainly been achieved. I always look forward to seeing Captain Flatcap at any festival in which I get the chance, and with the release of this EP, I am only more excited for the next opportunity.
Posted by Chris Swinglis at 10:03