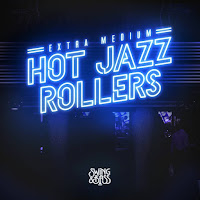 Swing & Bass have been running club nights in London and Nottingham for several years now – unfortunately I’ve yet to actually to make it to any of their events, I was especially gutted to miss the Summer party held at Hootananny Brixton last month, which looked exceptional (though I do note that they’re hosting the Saturday night Paradise Heights Takeover at Boomtown next week, alongside Bristol’s Swing N Tingz) – and they’ve just ventured into running a label. At the start of the year, they announced their first album, a compilation in support of the charity Mind, and they’ve just put out their first artist release, Hot Jazz Rollers, from one of the nicest guys in electro swing, Extra Medium.

Like C@ in the H@’s Ragz, Riddimz & Rollerz that I reviewed back in May, this EP is made up purely of tracks that fall under the swing ’n’ bass subcategory. Whilst this is not an entirely new direction for Extra Medium, it’s a little bit different from his standard releases, and the EP begins with ‘The Beat Goes On’, co-produced with WBBL, who’s arguably more familiar with this style. The decision pays off, as WBBL’s distinctive sound meshes with the garage-influenced vibes that Extra Medium does so well to create a great opener. The original sample slides seamlessly in with this updated style, without any sense of incongruence or disconnect whatsoever.

‘My House’ sets us off with an upbeat, party sound from the very start, and the horns really highlight the danceability of the sample. It’s tracks like this one that remind me of why when electro swing works – it works so well. This song is a great demonstrator of how jazz was always dance music, and that what we’re all doing is simply updating it for a contemporary audience. I’ve also got to give special mention to the flawless build-up, which is so natural as to sound almost unrecognisable beyond the standard drum ’n’ bass conventions.

The final track – and certainly the best on the EP – is ‘I Fall In Love’. Completely unique, and sounding unlike much else you’ll find in the genre, ‘I Fall In Love’ disregards the conventional big band sound common to most electro swing, and instead chooses to utilise a more smooth jazz, mellow basis upon which to build the track. Extra Medium does this type of thing very well, successfully showcasing the range of electro swing’s potential – and a track as unique and innovative as this one is a perfect example of ways in which a producer may use a jazz approach to create music that would fit into the parameters of jazz itself.

It’s no mistake that this EP features the word “jazz” in its title, and Extra Medium continually demonstrates himself to be working within the original and explorative framework that jazz music encourages. I’m a strong proponent of the argument that certain examples of electro swing should be considered the jazz of the 21st-century, and I think a release such as this one – particularly with tracks like ‘I Fall In Love’ – present a good case for that argument to be made. Swing & Bass have been wise to get him on their label, and if this is the standard of what we can expect to come, then we can indeed expect great things.
Posted by Chris Swinglis at 06:53